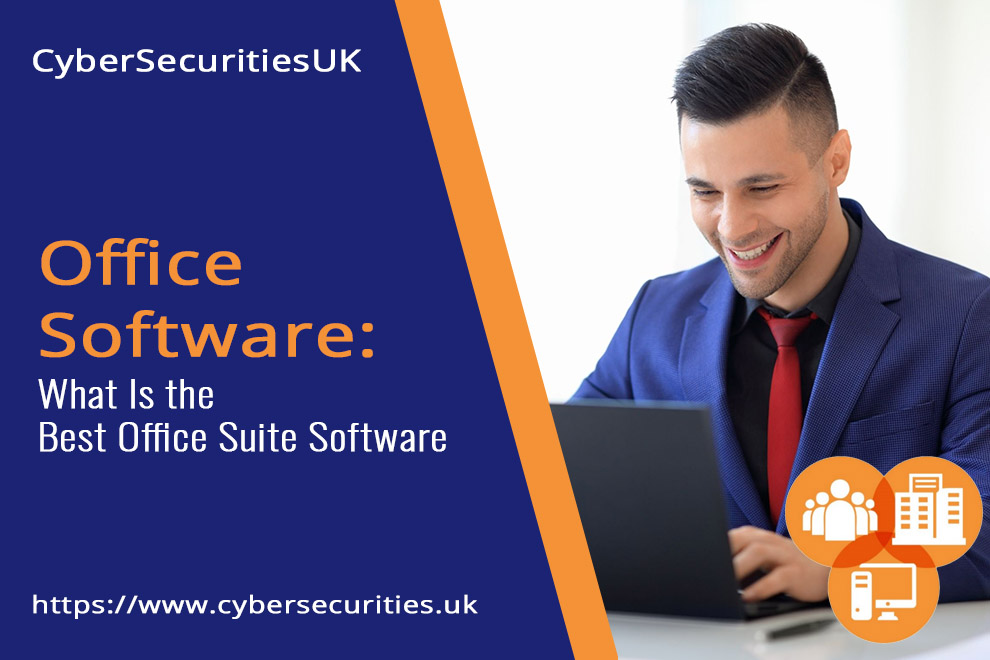 What Is the Best Office Suite Software?

When people think of a word processor, a presentation tool, or a spreadsheet, they tend to think of Microsoft Office. This is one of the most popular office suites in the market today, but it cannot be categorised as free office software.

Which Office Suite is best ?

When people think of a word processor, a presentation tool, or a spreadsheet, they tend to think of Microsoft Office. This is one of the most popular office suites in the market today, but it cannot be categorised as free office software. This software requires a monthly or annual subscription or, in some cases, a one-time fee, with the amounts differing based on what option the organisation selects. But there are other options aside from what Microsoft has to offer, and this article will explore all these options to help you decide the best office application based on your needs.

Here are some of the top options available for organisations:

Microsoft Office 2019 is an ideal office suite for organisations that have the budget to install the licensed software in every single computer in the workplace. It gives users access to essential apps, such as Word, PowerPoint, Excel, and Outlook, which are the applications often required for work. It requires a one-time fee, which already includes security updates (for a specific period), the traditional experience with the Microsoft Office Suite, and compatibility with Windows and macOS devices.

However, it also has a few drawbacks, including the lack of customer support and product upgrades. Users do get what they are paying for by not paying for ongoing fees. You are also only licensed to install it onto one PC, so if you change your computer you may have to purchase another license.

Microsoft 365 might be the best office software for organisations that want to give their employees access to all Office apps and other perks. A single subscription can be used to install Office onto several devices (used by the same person), all of whom will enjoy continuous upgrades and updates and customer support.  The software is compatible with Windows 8.1,, 10 and macOS. Its few downsides include ongoing payments, paying for apps that the employees may end up not using.

Choosing between the two can be confusing, but if the organisation plans on using the Office Suite apps long term, it might be a better idea to subscribe to Microsoft 365. It is one of the best office application software because it gives its users full access to all its apps and saves the files in the cloud for the users’ convenience.

Some of its features include Word, Outlook, PowerPoint, Excel, Access, Publisher, 1TB of OneDrive storage and purchase more if this is not enough, Skype minutes for landline calls, and customer support. Other premium features include Microsoft Editor that checks grammar, spelling, and style and creative tools such as Resume Assistant, PowerPoint Presenter Coach, Designer, and Ideas. Microsoft 365 also offers access to stock photos, icons, templates, and fonts; and the Money app that helps track household finances. You also have the option to bundle in Office 365 Email as well.

This online office software offers Gmail, Google Meet, Google Docs, Google Chat, Google Slides, Google Sheets, and Google Forms in Google Drive. It is compatible with Windows, Linux, Mac, and other computers as long as they are connected to the Internet. It also makes collaborating and sharing files much easier without having to download anything.

However, it does not have reliable offline use, so Google Workspace works best for organisations whose users have constant access to the Internet. Business users may have to pay a monthly subscription fee, but non-business users can use it for free until their free Google Drive space is full.

Dropbox’s office programs may not be as well known as the other programs listed in this article. However, the platform does offer a word processing app that can compete with its counterparts from other developers. Dropbox Paper users benefit from the app’s tight integration with Dropbox, which makes file sharing more convenient.

Dropbox Paper is open to embracing multiple collaborators at once and can export files to the widely used .pdf and .docx formats. File adding is a simple drag and drop onto an open Dropbox Paper window or Dropbox folder. Users applaud it for its user-friendly interface, although long-time Word users might struggle with it at first.

Only those with a Dropbox account can use Dropbox Paper for free, and it’s easy to open a free account with this file sharing platform. Users can continue to use this word processing app as long as their Dropbox storage usage does not exceed the free 2GB threshold. Beyond that, they will have to pay a monthly or annual subscription fee.

This is perfect for organisations that mostly use Mac computers in their office. This software comes bundled with the purchase of an Apple Mac computer. Pages, Keynote, and Numbers may not be as well known as the Microsoft and Google office suites, but they are great for users who mainly work using Apple devices and the iCloud.

WPS is another free office suite software supported by ads. Users who pay an annual fee can use this software without being bothered by these ads. It offers users WPS Writer, WPS Presentation, WPS Spreadsheet, and WPS Presentation. Its word processing app has been well-received and has a customisable interface, provides tabbed document editing, and 1GB storage.

Organisations that are used to Microsoft Office’s software may not have much trouble moving to FreeOffice because of the similarities between both products. Developed by SoftMaker, it is free for use and compatible with Mac, Linux, and Windows devices. Its core apps include TextMaker, Presentations, and PlanMaker. This free office suite allows users to choose between the newer Windows style and modern ribbon style. Users who rely more on their Android tablets can enjoy the upgraded but free SoftMaker Office HD.

One of the issues with the non-Microsoft Office users is the incompatibility of their files with Microsoft users, but this won’t be a problem with LibreOffice. It is an open source office software that works with Windows, Linux, and Mac devices, as well as Android mobile devices. It is supported by active developers who release updates and new versions every month or so.

You are also able to purchase paid for versions which entitle you to security updates and support, these typical cost around £30 per year per user license.

This software is mostly used by law offices, academics, and government agencies. It is only compatible with Windows PCs and does not have an online version. While its Presentation and Quatro Pro spreadsheet apps may not be as impressive as their counterparts in this list, it has a powerful word processor app. It may have issues with compatibility, but law offices still favour WordPerfect Office for its formatting benefits. With Reveal Codes, it is easier for users to correct formatting and use unique redacting, numbering, and editing features. On the other hand, users find it more troublesome to change Word’s existing document formatting.

Organisations that want one of the best free office software in the market may consider using OpenOffice. It might not have as many features as Microsoft’s software, but Writer, Impress, Calc, Base, Math, and Draw still get support from volunteer open source developers. Since this software still struggles to keep up with the apps backed by professional developers, it is better for organisations to pay a subscription fee for full-featured office suite software. This way, they can keep their productivity levels high.

It would be easier for organisations to decide what office software app to use based on their budget, features they need, compatibility, and subscription requirements. At least they can look at this products above as a starting point, and narrow down their choices. And while there are free applications in the market, organisations may still benefit more from the diverse features they can find in paid office applications.

Due to the additional features available our general advice is to consider Microsoft Office Subscription products, in particular if you want a one stop shop which includes email, storage and an Office productivity suite.

The Benefits of Using Cloud Storage

When was the last time you checked your backups?

Making good use of Passwords

Why is Cyber Security Important for every business owner?

It’s Time to Ramp Up Your Email Security