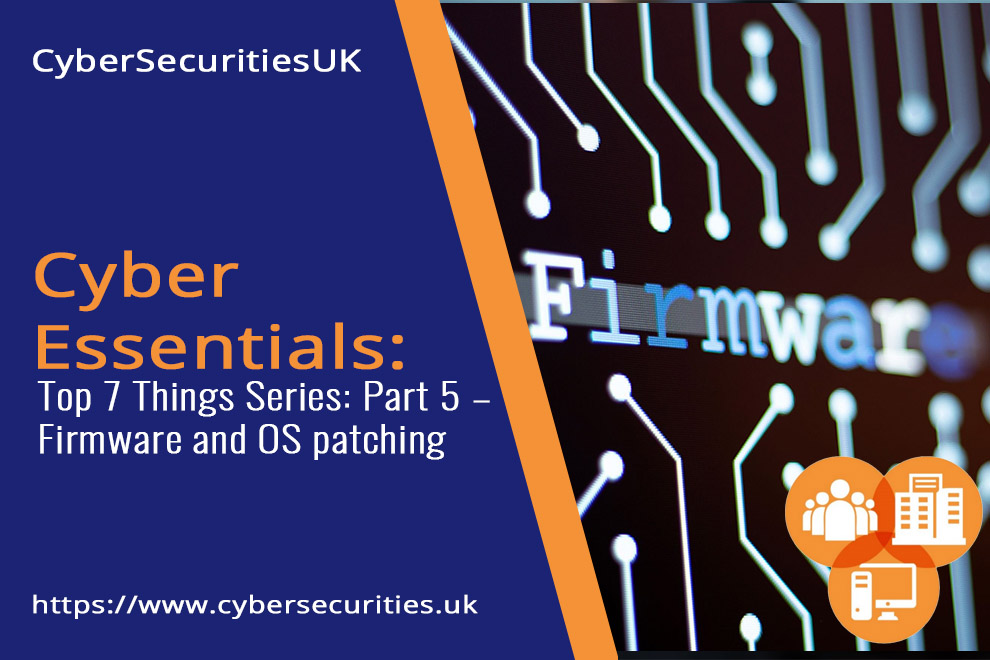 Here is part 5 of the Cyber Essentials blog series: Top 7 things you need to know before you start your assessment – Operating System and Firmware Patching

Today we are going to talk about Operating System and Firmware Patching.

Let’s start with “What is Patching”

A patch is a small program, or in some cases a major update that is designed to resolve or fix a known issue. They are normally released on a regular schedule, for example

Why  are they important

Bad guys will regularly review patches and attempt to reverse engineer them, to identify what changes have been made, in a lot of instances they are then able to take advantage of unpatched computers. They will then write programs to specifically target these vulnerabilitites.

This can happen as quickly as several hours to several weeks.

Vulnerabilities are graded based on a scheme known as CVSS, and this is based on a rating of 1 (very low risk) to 10 (very high risk), normally any vulnerabilities over 7 are deemed high risk and need to be applied as promptly as you can (in particular for Cyber Essentials Plus).

Operating system and firmware unpatched systems are responsible for a large percentage of attacks, but comes second to “application updates” – which we are going to cover in the next part in our series.

In most cases operating system updates will happen automatically, or you will receive a prompt to install them. However when it comes to firewalls.routers the process is normally manual.

What about unsupported systems ?

Generally speaking older non-supported versions of systems for example Windows 7 are likely to also suffer from the same vulnerability (not always but it’s more common than you would think), and the bad guys can very easily reverse engineer the patch to identify the underlying vulnerability. This is why it’s very important you only use supported devices across your environment – this is also a requirement for CyberEssentials.

You will be asked to include details of devices in your Scope – Section 2, and also your process to describe Firmware and OS patching in Section 6 – question A6.4

Currently windows 8.1 and Windows 10 are supported,

Since 2015 when Windows 10 , have been very aggressive with their 6 month version rollout, this has meant that there is increased pressure on you to ensure the Build version of Windows 10 is still under support. Normally you will receive updates via Microsoft’s automatic update process, but sometimes this can fail.

Ensure you confirm your Windows 10 versions and builds are still under support, otherwise this may cause your assessment to fail.

In relation to Server Operating Systems, you need to be running Server 2012 onwards, anything older and you’re going to fail CE..

If you’re not sure –

unless you have specifically paid for Extended Security Updates – if you have, specifically state this in your scope – but this is quite rare as it’s expensive.

Lucikly this is easier to check in the case of MAC (they support the current version and the two prior editions) with a new version normally released around September each year.

I wanted to also mention specifically mobile devices, as part of your assessment you will need to specify their version, manufacturer and also model.

Apple is generally quite straightforward in that you must be running the latest version.

However Android is a wild west and you may find your assessment fails if you are using an old mobile device – so check with the manufacturer that your handset is still under support.

Let’s share some statistics and data with you regarding patching

In particular for Cyber Essentials you must have a robust patching policy where high risk or critical patches are deployed within 14 days, this covers all devices in scope namely, firewalls/routers/computers/laptops and mobile devices.

3 scary signs your business has been hacked